Beneath The Cross Of Jesus (5) - Hope4Bath

Isaac Watts (1674-1748) This hymn is often referred to as the finest in the English language. It came out of a complaint by Isaac Watts to his father about the poverty and monotony of church worship. His father challenged him to produce something better. He responded with the beautiful hymn, ‘When I survey THE WONDROUS CROSS’. He went on to write in the region of 600 hymns! Certainly, his first hymn gives us much to meditate upon. His use of the first person presents us with a powerful challenge as to how much THE CROSS OF CHRIST means to each one of us, personally! 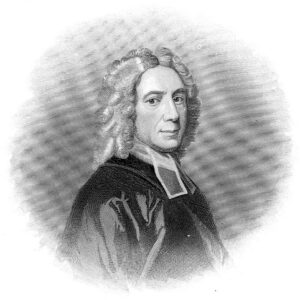 When I survey THE WONDROUS CROSS, on which the Prince of Glory died,
My richest gain I count but loss and pour contempt on all my pride.

Forbid it Lord that I should boast, save in the death of Christ my God;
All the vain things that charm me most, I sacrifice them to His blood.

See from His head, His hands, His feet, sorrow and love flow mingled down;
Did e’er such love or sorrow meet, or thorns compose so rich a crown?

Were the whole realm of nature mine, that were an offering far too small;
Love so amazing, so divine, demands my soul, my life, my all.

Watts was not a good-looking person, naturally speaking; indeed, he was a sickly man to look at. He was just five feet tall, with a large head, a hooked nose and piercing eyes. Nevertheless, he was impressive, spiritually speaking. He understood that what Jesus Christ did for him on the cross, demanded everything from him in return (note the last verse). All else paled into insignificance, when he gazed at the cross and the One who died upon it for his sins. He could have joined the apostle, Paul, and said, ‘But God forbid that I should boast except in THE CROSS OF OUR LORD JESUS CHRIST, by whom the world has been crucified to me, and I to the world’, Galatians chapter 6 verse 14.