THE ROMAN BATHS are the most popular visitor attraction in Bath. The hot springs have long been thought to heal the sick. 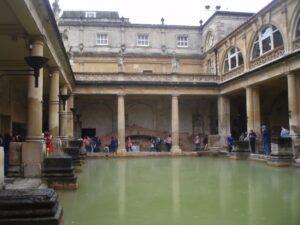 The Romans mainly used baths for leisure but some people believed in their therapeutic benefits. By medieval times the Church was against bathing, calling it a luxury and immoral. However, later on, it condoned their use for spiritual purification. As the Baths grew in popularity, there were royal visitors, e.g. King Charles 1 in the 1600s and Queen Anne in 1702. By the Georgian period, people began to drink the water instead of bathing in it.

In 1706 THE PUMP ROOM was built for those who wished to drink it. Drinking the water became much more popular, so THE PUMP ROOM was extended in 1795. Facing stiff opposition from other Spa towns, new treatments were offered at the Spa Treatment Centre in Bath, which boosted visitor numbers immensely. After the second world war, numbers declined. In 1978 spa treatment therapy was dismissed by orthodox medicine. Also a young girl died of meningitis after swimming in the waters.

No such fate will ever befall those who drink of the ‘Water’ that Jesus offered a Samaritan woman, John chapter 4 verses 7-26. When this woman came to the well, Jesus approached her in terms of physical need, (‘Give me a drink’); however, He moved swiftly to her spiritual need (‘living water’). She failed to realise that her fundamental need was for spiritual water that could not be drawn from a natural well. Water was an appropriate starting point to bring her to a sense of deep spiritual need. The salvation she required cleanses the soul, just as water cleanses the body.

The water of salvation that Jesus spoke of springs from an everlasting fountain that is placed within, when we trust Jesus Christ as our Saviour.